From Wikipedia, the free encyclopedia

All processes based upon the gelatin-silver process are similar, regardless of the film or paper's manufacturer. Exceptional variations include instant films such asPolaroid and thermally developed films. Kodachrome required Kodak's proprietary K-14 process. Kodachrome film production ceased in 2009, and K-14 processing is no longer available as of December 30, 2010.[2] Ilfochrome materials use the dye destruction process.

Key stages in production of Ag-based photographs. Two silver halide particles, one of which is impinged with light (hν) resulting in the formation of a latent image (step 1). The latent image is amplified using photographic developers, converting the silver halide crystal to an opaque particle of silver metal (step 2). Finally, the remaining silver halide is removed by fixing (step 3).

All film and paper is treated in a series of chemical baths, which are closely monitored and maintained at a specific temperature and treatment time. Developer baths are most sensitive to deviations from the standard time and temperature of treatment; other baths are less sensitive.

The washing time can be reduced and the fixer more completely removed if a hypo clearing agent is used after the fixer.

Once the film is processed, it is then referred to as a negative. The negative may now be printed; the negative is placed in an enlarger and projected onto a sheet of photographic paper. Many different techniques can be used during the enlargement process. Two examples of enlargement techniques are dodging and burning.

Alternatively (or as well), the negative may be scanned for digital printing or web viewing after adjustment, retouching, and/or manipulation.

† In modern automatic processing machines, the stop bath is replaced by mechanical squeegee or pinching rollers. These treatments remove much of the carried-over alkaline developer, and the acid, when used, neutralizes the alkalinity to reduce the contamination of the fixing bath with the developer.

This process has three additional stages:

Chromogenic materials use dye couplers to form colour images. Modern colour negative film is developed with the C-41 process and colour negative print materials with the RA-4 process. These processes are very similar, with differences in the first chemical developer.

The C-41 and RA-4 processes consist of the following steps:

In the RA-4 process, the bleach and fix are combined. This is optional, and reduces the number of processing steps.[7]

Transparency films, except Kodachrome, are developed using the E-6 process, which has the following stages:

Black and white emulsions both negative and positive, may be further processed. The image silver may be reacted with elements such as selenium or sulphur to increase image permanence and for aesthetic reasons. This process is known as toning.

If colour negative film is processed in conventional black and white developer, and fixed and then bleached with a bath containing hydrochloric acid and potassium dichromate solution, the resultant film, once exposed to light, can be redeveloped in colour developer to produce an unusual pastel colour effect.[citation needed]

Before processing, the film must be removed from the camera and from its cassette, spool or holder in a light-proof room or container. 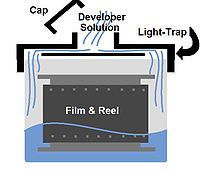 A cut-away illustration of a typical light-trap tank used in small scale developing.

In amateur processing, the film is removed from the camera and wound onto a reel in complete darkness (usually inside adarkroom with the safelight turned off or a lightproof bag with arm holes). The reel holds the film in a spiral shape, with space between each successive loop so the chemicals may flow freely across the film's surfaces. The reel is placed in a specially designed light-proof tank (called daylight processing tank or a light-trap tank) where it is retained until final washing is complete.

Sheet films can be processed in trays, in hangers (which are used in deep tanks), or rotary processing drums. Each sheet can be developed individually for special requirements. Stand development, long development in dilute developer without agitation, is occasionally used.