Lens Chromatic Arberration is an optical fault in a lens that creates a less than perfect image. Below you will find the cause and ways to correct the effect.

Chromatic aberration is caused by lens dispersion, with different colors of light travelling at different speeds while passing through a lens. As a result, the image can look blurred or noticeable colored edges (red, green, blue, yellow, purple, magenta) can appear around objects, especially in high-contrast situations.

A perfect lens would focus all wavelengths into a single focal point, where the best focus with the “circle of least confusion” is located, as shown below: 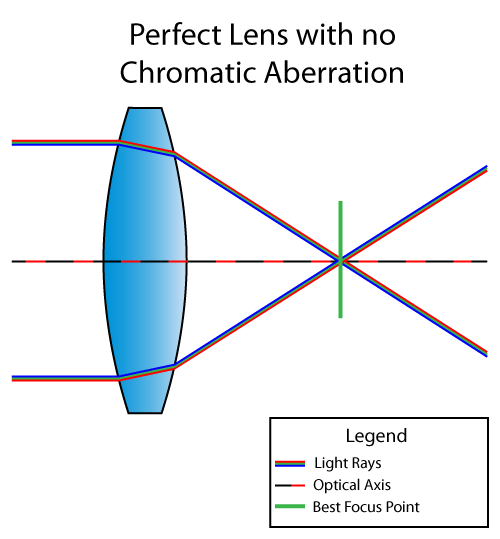 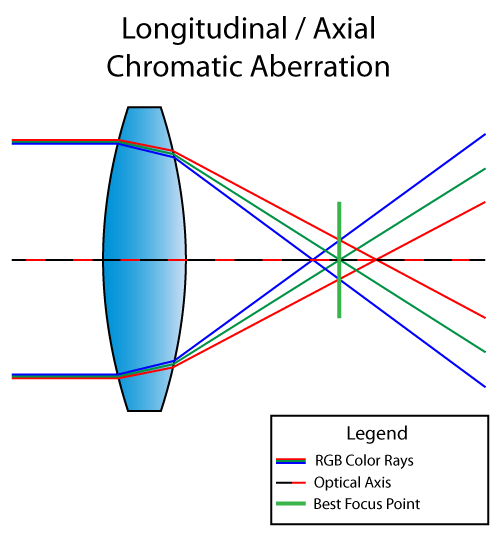 Lenses with Longitudinal Chromatic Aberration problems can show fringing around objects throughout the image, even in the center. Red, Green, Blue or a combination of these colors can appear around objects. Longitudinal Chromatic Aberration can be dramatically reduced by stopping down the lens. Fast aperture prime lenses are typically much more prone to LoCA than slower lenses.

The bottom crop was corrected in Lightroom’s “Lens Corrections” sub-module with a single click. The same can be done in Photoshop, but involves more steps (if not using the Camera RAW tool). 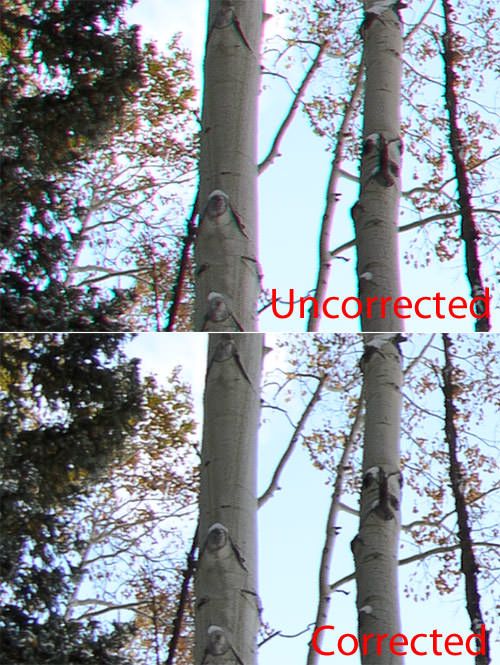 Lateral Chromatic Aberration, also known as “transverse chromatic aberration”, occurs when different wavelengths of color coming at an angle focus at different positions along the same focal plane, as illustrated below: 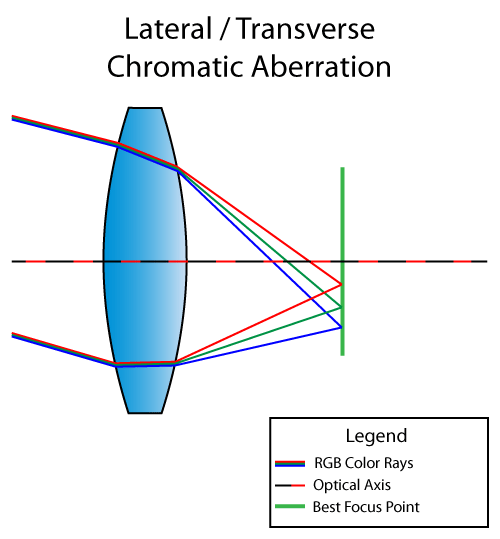 Unfortunately, many lenses have both longitudinal and lateral chromatic aberrations present at the same time. The only way to reduce these aberrations, is to stop down the lens (to reduce LoCA) and then fix lateral CA in post-processing software like Lightroom and Photoshop.

While many modern lens manufacturers employ specific techniques to reduce chromatic aberrations using achromatic/apochromatic optical designs and special extra-low dispersion elements, chromatic aberration is still an issue on most prime and zoom lenses that we just have to learn how to get around with.

Dealing with fringing
More expensive lenses often suffer less from chromatic aberration – an example of where the adage, ‘you get what you pay for’ rings true. However, even if you can’t afford the very best lenses money can buy, all is not lost.

The automatic detection and defringing process in Adobe Camera Raw is very quick and very effective, while using the manual sliders enables you to tackle more resilient purple and green halos that sometimes continue to cling to the edges of objects at the extreme edges of the picture.